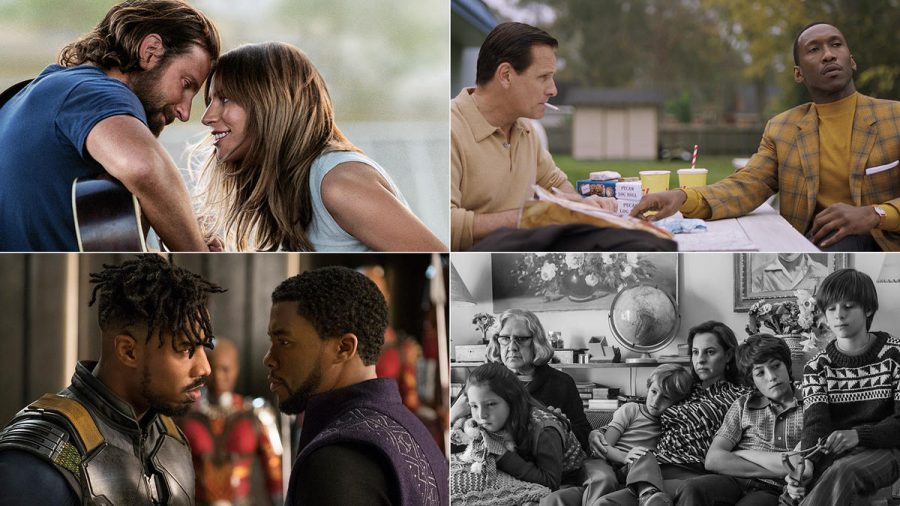 Shown here are some of the films nominatated this award season. From the right: A Star Is Born, Green Book, Black Panther and Roma.

This year’s celebration of the best in film was different than what audiences may be used to—there were many firsts and a few disappointments. Whether you’re following the Oscars, Critics Choice, Screen Actors Guild or one of the other over 30 film awards in U.S., you are in for great surprises, especially from the best picture award nominations. But this year also brought some disappointments; for example, once again this year the Oscars’ nominees for director are all male.

We have to talk about Black Panther as one of the films making history this year! Directed by Ryan Coogler and starring Chadwick Boseman, Michael B. Jordan, Lupita Nyong’o and Danai Gurira, it is the first superhero movie ever to be nominated for an Academy Award for Best Picture. The titular character, Black Panther, was the first superhero of African descent in Marvel comics. According to IMDb, Black Panther tells the story of “T’Challa (Chadwick Boseman), heir to the hidden but advanced kingdom of Wakanda, who must step forward to lead his people into a new future and must confront a challenger from his country’s past (Michael B. Jordan)”. This film is one of my personal favorites this year because of how beautifully it was filmed and the phenomenal casts’ performances. The real hero is the Black Panther story, which keeps the viewer intrigued the whole time.  Black Panther deserves all its nominations and should win many awards.

Another film making history this year is Roma. Roma is from Mexico and the first ever streaming film to be nominated for best picture. The movie is on Netflix.  Filmed in black and white, the story is about the year in the life of a middle-class family, as seen through the eyes of Cleo, the live-in maid. The film takes place in the neighborhood Colonia Roma, in Mexico City during the 1970s.  The story is a semi-autobiographical look at the upbringing of the writer and director Alfonso Cuarón.  The movie has a personal feel that is beautiful.  After hearing an interview with Cuarón, I can see why.  He explained how he found the actress, Yalitza Apariciao, to play the lead role of the maid,

“I searched Mexico City until I found a young woman that looked like our maid, she was such a big part of my life.” Apariciao is depicted in the film as not only a maid but a caregiver and member of the family as well. Apariciao’s performance was nominated for many best actress awards and she deserves them.  The 1970s were political, turbulant times in Mexico.  It is not a main feature of the film, but if you are curious about the history, just search “Mexico’s Dirty Wars,” it’s interesting!

Two other films that I really enjoyed were Green Book and A Star Is Born. Green Book tells the story of pianist Dr. Don Shirley played by Mahershala Ali and bouncer turned driver Tony Lip played by Viggo Mortensen as they embark on the classical pianist’s tour through the deep south. I love how this story is about friendship and how even through the two characters may have many differences they find things that make them feel the same and closer. Alternatively, A Star Is Born is about a musician (Bradley Cooper) who helps a young singer (Lady Gaga) find fame, even as alcoholism and drug abuse send his own career into a downward spiral. The music in this film was amazing and it definitely deserves its nomination for original song in “Shallow”.

So this awards season, I hope you get chance to see some of the films nominated. Oscar winners are announced on Sunday Feb. 24 so get your movie viewing on and enjoy the awards season!

Tess Peterson can be reached at [email protected]