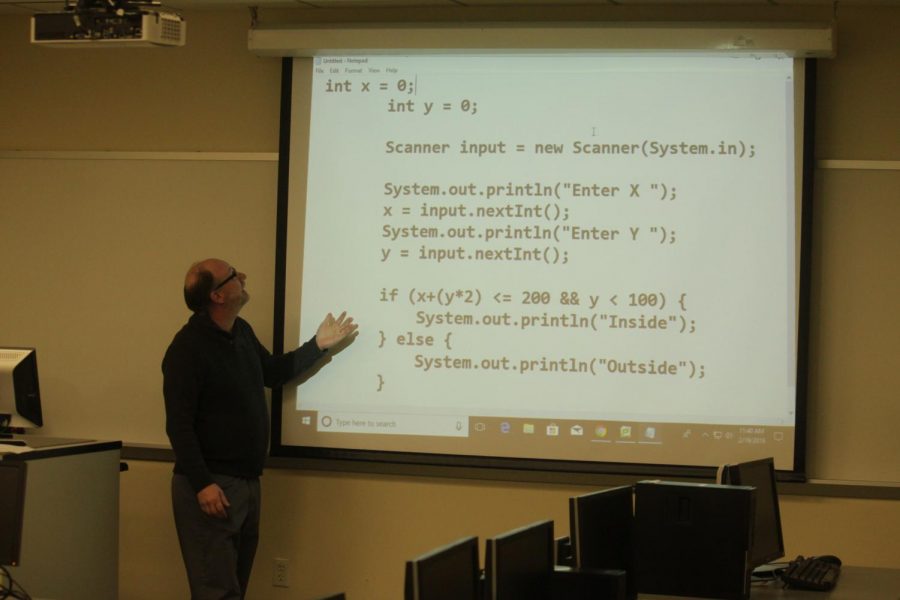 Builder of robots, master of board games and teacher of the occasional class — Tom Sidener is one of the newer faces around campus. Students can usually find him chatting with students or colleagues or tinkering with his Lego-robot-hybrid creations in his office in Logan Hall.

The new assistant professor of computer technology and networking has a lot to say about what he feels the learning experience should involve for students and how his department can get there — one jump forward at a time.

Sidener didn’t always plan to be a professor. When he started his education at Sangamon State University, (now University of Illinois Springfield), he wanted to be in law enforcement. As a criminal justice major, he found the subject interesting until he did an internship at the Decatur Police Department — and that was the end of that.

The final nail in the coffin of changing his career path was one of his own professors, Keith Miller, who was teaching computer science at the time.

“He was the best teacher I had ever had and made me want to be a teacher myself,” Sidener said. “If you’ve ever had a teacher that really changed your life, that was him for me.”

Sidener carried his old professor’s passion for teaching into his own career, and that’s why he moved from UIS to LLCC this past fall.

“It’s more personal,” he states, commenting on the way LLCC is more focused on their students education.

Lincoln Land gives students every opportunity to succeed, he said. The college has small class sizes and staff more readily available to students.

“As a past LLCC student, he remembers the struggles students face and works with them to achieve success,” said Carmen Allen, interim dean of business and computer technology. “To motivate students, his classes are interactive, interesting and fun.”

Sidener said having taught at UIS, he saw the skills LLCC transfer students lacked. That knowledge has given him the chance to develop the program to better prepare students for transfer.

“Mr. Sidener has given me a second chance in school.” said computer science student Maggie Becker. “As a hairdresser coming back 12 years after a previous failed attempt at college, having him as an instructor has never made it easier, especially in such an intimidating field like computer science.”

Becker had initially only taken an introduction course with Sidener when starting back up at school, but his passion for making the classroom a comfortable environment to not only learn, but make mistakes and be able to gain experience from them, made the future look less intimidating.

“He gives us real-world expectations and shares with us the challenging programming problems we may face in the professional world, sharing insight on his own experience working as a computer science student and in the career force with a tech job,” Becker said.

But it’s not all fun and games for Sidener — well, metaphorically speaking. His want to make the classroom as interactive and engaging to prospective students as possible ties in to a hobby of his one may not expect: board games.

For the last five years, Sidener has attended GenCon, a convention where board game lovers alike join together to discuss, sell, shop and play games together. This year, Sidener has been invited as a teacher for their teacher-exclusive conference day to learn teaching techniques. He hopes to enhance his classroom with games that not only ease learning but make it more applicable and immersive.

Sidener also hosts board games and events at LLCC on occasion.

Sidener would like to see more customized education for students, and he’d like to add 13 Lego robots for students to work on.

A robotics class would be a great addition to Lincoln Land’s computer science program, Sidener said. He thinks that if LLCC offered robotics courses they would attract more students.

Carmen Allen said, “He is a wonderful addition to our faculty.”

Sage Gass can be reached at [email protected]